Translation of the article published by 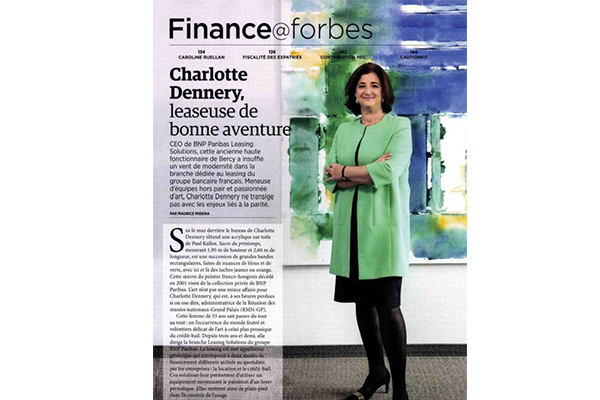 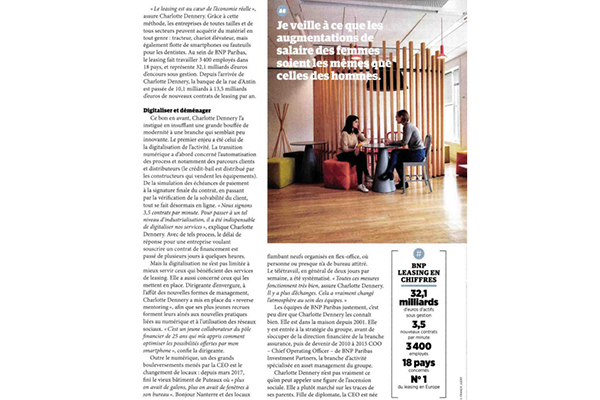 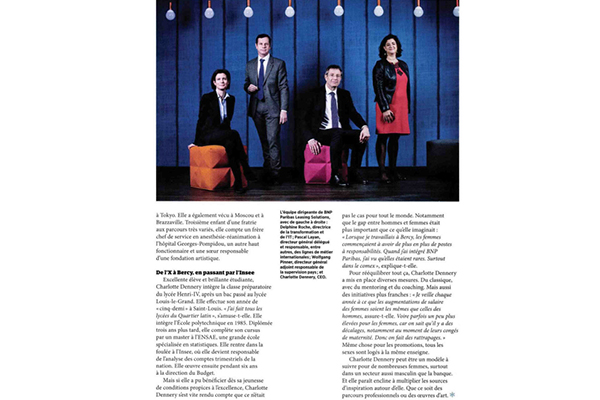 Discover the original article in French

CEO of BNP Paribas Leasing Solutions, this former senior official at the Ministry of Economy and Finance has brought a breath of fresh air to the French banking group’s leasing branch. An exceptional team leader and art enthusiast, Charlotte Dennery does not make any concessions when it comes to equality.

On the wall behind Charlotte Dennery’s desk is an acrylic canvas painting by Paul Kallos. “Sacre du Printemps” measuring 1.95 m in height and 2.60 m in length, represents a series of large rectangular strips in green and blue with touches of yellow and orange here and there. This work by the French-Hungarian contemporary artist who died in 2001 comes from BNP Paribas’ private collection. Art is a serious matter for Charlotte Dennery, who, in her spare time, if we can call it that, is a Director of the National Museum Association-Grand Palais (Réunion des Musées Nationaux-Grand Palais) (RMN-GP).

The 53-year old woman switches from the muted and intentionally delicate world of art to the much more prosaic world of leasing with ease. For the past three and a half years, she has been managing the BNP Paribas Group’s “Leasing Solutions” branch. Leasing is a general term that corresponds to two different finance methods used by companies on a daily basis: rental and leasing. These solutions allow them to use a piece of equipment in exchange for the payment of a regular fee. They are therefore a key player of the usage economy.

“Leasing is at the heart of the real economy,” explains Charlotte Dennery. Thanks to this method, companies of all sizes and sectors are able to acquire equipment of all types: from tractors and forklifts to dentist chairs, or a fleet of smartphones. At BNP Paribas, leasing provides jobs for 3,400 people in 18 countries and represents €32.1 billion of assets under management. Since Charlotte Dennery’s arrival, the bank’s subsidiary on “rue d’Antin” has progressed from €10.1 billion to €13.5 billion of new leasing contracts per year.

Charlotte Dennery instigated this great performance by bringing a modern air to a branch that was considered to be lacking innovation. The first challenge was the digitalisation of business. Initially the digital transition involved the automation of processes and, in particular, the customer and partner journeys (leasing is a solution offered by manufacturers that sell equipment). From the simulation of payment schedules to the final signature of the contract, including the verification of the customer’s solvency, everything is now done online. “We sign 3.5 contracts a minute. It was essential to digitalise our services in order to achieve such a level of industrialisation,” explains Mrs. Dennery. With such processes, the response time for a company wishing to take out a financing contract has reduced from several days to several hours.

But digitalisation is not limited to better serving those who benefit from leasing services. It also concerns the people who implement these services. A remarkable leader, always on the lookout for new forms of management, Charlotte Dennery put into place a “reverse mentoring” programme wherein the younger recruits of the company train the elder ones in new digital practices and  social media. “It was a 25-year old employee from the finance division who taught me how to get the most out of the opportunities offered by my smartphone.”

Apart from digital transformation, one of the biggest changes initiated by the CEO was the change of office premises: since March 2017, the old building in Puteaux where the concept of “higher your grade, more windows you get in your office” has  disappeared to make way for a brand-new flex-office space in Nanterre, where almost no-one has their own office. In addition, homeworking of generally two days a week has been put into place. “All these measures are working very well,” she states. “It facilitates communication and has really changed the work atmosphere for the better among the teams.”

It would be an understatement to say that Charlotte Dennery knows the BNP Paribas’ teams well. She has been with the company since 2001. She started out in Group Strategy before taking over the financial direction of the insurance branch, and then becoming COO – Chief Operating Officer – of BNP Paribas Investment Partners, the business branch specialising in the group’s asset management, from 2010 to 2015.

Charlotte Dennery is not really what you would call a social climber. She tends more to follow in her parents’ footsteps. Daughter of a diplomat, the CEO was born in Tokyo. She has also lived in Moscow and Brazzaville. Third child in a family with very varied career paths, she has a brother who is head of the anaesthetic-resuscitation service at the Georges Pompidou hospital, another who is a senior civil servant, and a sister in charge of an art foundation.

A brilliant student, Charlotte Dennery joined the preparatory class at the Lycée Henri IV after completing her baccalaureate at the Lycée Louis-le-Grand. She repeated her second year at Saint-Louis. “I attended all the high schools in the Latin quarter,” she laughs. She joined the Ecole Polytechnique in 1985. Graduating three years later, she completed her studies with a Master’s degree at ENSAE, a top-ranking higher education institution that specialises in statistics. She then joined the National Institute of Statistics and Economic Studies (INSEE), where she was responsible for analysing the Nation’s quarterly accounts. She then spent six years working in the Budget department.

Although she was able to benefit from opportunities that favoured excellence from a young age, Charlotte Dennery quickly realised that this was not the case for everyone. The inequality between men and women, turned out to be in particular much greater than she had ever imagined: “When I worked at Bercy (the Ministry of Economy and Finance), women were starting to hold more and more important positions. However, when I joined BNP Paribas, I saw that there were very few of them, especially in the Board of Directors,” she explains.

Charlotte Dennery implemented various measures to balance out this situation. Traditional measures, like mentoring and coaching as well as more direct initiatives: “Each year, I make sure that the salary increments are the same for women and men, even sometimes slightly higher for women because there tends to be some setbacks for them like when they take maternity leave. Therefore, we try and make up.” The same applies to promotions, with everyone receiving equal treatment.

Charlotte Dennery is a role model for many women, especially in a sector as masculine as banking. And she appears to want to increase the sources of inspiration around her, whether in terms of careers or works of art. 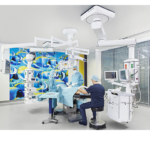 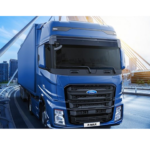 Partnership
See all the news